Oh no, just when I had planned a bit of weekend trolling! 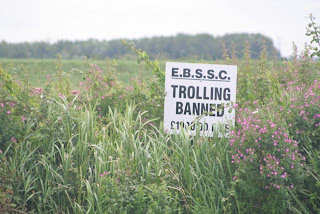 Noticed this on the way up The Great Ouse north of Ely. I didn't feel guilty - but then I didn't quite know what I would have been guilty of! Should I support a campaign to BRING BACK TROLLING? Am I relieved that EBSSC have protected me from Trolls? Are Trolls endangered by my cruising up and down river? I just didn't know what to think. Until I got home and Googled it. Maybe you know already ... but for those of us to whom trolling is a novelty here's the answer from wikipedia.


And if you think the answer is a let-down - just Google it again, to find the alternative meanings. Oh ... really?! And here is a very serious article about nasty trolling, from the BBC. Definitely not a joke.

And if you've time on your hands try guessing what EBSSC is. If you think it's a secondary school in Santa Cruz you've been cheating by Googling - and you're wrong anyway!

[Postscript: Trolling, defined as "online abuse" or "virtual violence" is a form of bullying that has hit the headlines in March 2012. This blog entry was written long before I became aware of this and the lighthearted tone of this blog entry reflects that. There can be no excuse for insulting and bullying people online.]
Posted by Duncan at 16:38 3 comments:

Following on from my previous blog I'm now thrilled to say that I've solved the problem! For the benefit of those who care, here's what I did.
I checked I had Google Earth installed.
[Update: latest blog for list of Railways near Canals]
Choose the downloaded kmz file to open in Google Earth.
Knowing I wanted mainly railway lines and stations I selected More > Transportation > Rail in the Layers panel and unticked mostly everything else.

Finally in the Places panel I ticked My Places > Temporary Places > UK_Canals_Route_only and ticked absolutely everything within that. If you're only interested in a small number of canals you need only tick those you need. Screenshot below with Ely station highlighted for clarity. The Ouse is lined in blue. 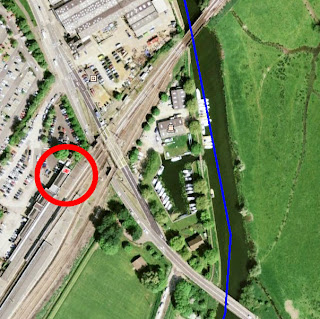 So here's my next (or the one after that...) project - noting railway lines near to canals so I can moor up, catch a train and come back later - or friends and family can catch up with me while I'm away.
Next, to find friendly folks who will accept me mooring for a short while and where I won't block anyone else - a bigger problem altogether!

Best Canal Map in the UK?

We use the Norie and Wilson Guide when underway (The River Great Ouse and Tributaries by Andrew Hunter Blair) and find it perfect for our needs, full of detail. But looking further afield and using up to date technology Google Maps and Google Earth are fantastic information sources.
I've just come across a site called UKWRS here which shows all UK canals laid on Google Maps. I know Canal Planner does this but there it's static, while the UKWRS is more interactive. 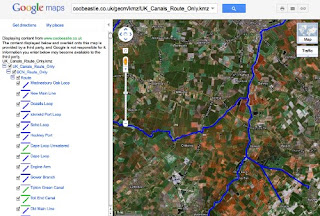 Now I'm confused over the relationship between Google Maps and Google Earth. The reason? I'm trying to find a way of overlaying the canals and the railway stations on a single map so I can identify places where I can moor up for a few weeks, walk or bike to a railway station and make my way home for a break before returning to continue where Patience left off.
Anyone know a way? It must surely have been done. To have marinas featured too for safe short term moorings would help ....

[see next blog entry for my answer ...]
See 2015 Blog for my final solution - a Google Earth layer featuring railways near canals.]
Posted by Duncan at 22:18 No comments:

July saw us away from our usual Ouse rivers and down in Somerset in Minehead near the Porlock Weir. Porlock Weir has been a small port for hundreds of years populated mainly by fishermen and their families.

The harbour at Porlock has some fine and recently restored dock gates and a sluice tunnel to keep the harbour free of stones and to stop inrush of heavy seas during storms and high tides. 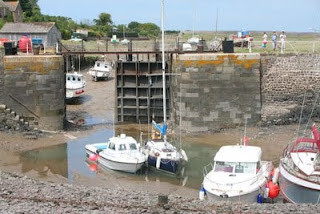 Here you see the gates open at low tide ... 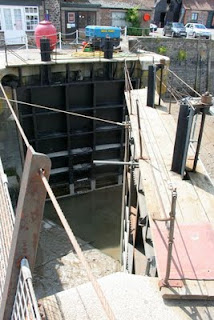 ... and here a closer view from the side. Pulleys linked by wires to electric winches on the harbour wall pull the gates closed as required. No hand winding of lock gates here .....

I drove down from Stoke Ferry, where I'd been told there were no moorings until Hilgay. It was rumoured that there was a single landowner who held the land between Hilgay and Stoke Ferry and would not permit moorings. 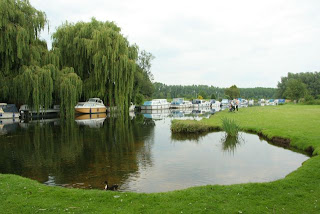 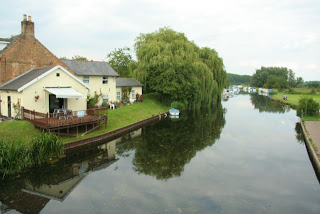 So Hilgay came as a pleasant surprise, with a flurry of boats, a lengthy GOBA mooring and some additional green stretches alongside a recreation ground for general visitors. Shops and a garage too.
The GOBA mooring is just yards from the Rose and Crown which boasts food every night except Mondays. From here it's a little over 2 hours by narrow boat to Stoke Ferry and half an hour to  the Great Ouse and thence Denver.
George Manby lived most of his life in Hilgay, famed for his invention of a rocket to send a line to ships in distress. His memorial is in the churchyard.
Posted by Duncan at 17:59 1 comment:

Stoke Ferry on the Wissey

As part of my recce by car before going up by boat I drove from Brandon (see previous post) to Stoke Ferry on the River Wissey. There I found not quite what I was expecting.
Reaching a roundabout joining the A134 and the B1112 here I followed signs to Stoke Ferry village (perfectly pleasant, a pub or two and a shop or three) but had to go round to come across the river and moorings, a bit of a walk from the village.
Aerial views show lines of narrow boats along the banks leading up to Stoke Ferry, which is encouraging, but this turned out to be very pleasant but private moorings. No room for visitors. 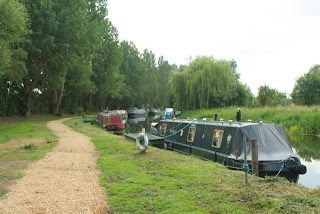 Walking on through this private area I felt a bit of a trespasser even though I was entirely harmless. Then I came to some more warning signs and decided to turn back. On the other side of the roundabout opposite Whittington Garage (shop included) I found the Grange Farm Touring Park - an unlikely site for mooring, I thought, bristling with caravans in orderly rows, very neat and well scrubbed. Dogs only on leads. No children. 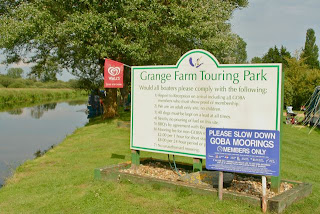 Look carefully and you will see a long list of "don'ts" or at least things you have to pay for. But as it's a GOBA mooring surely that's fine? Turns out GOBA rent the mooring from the caravan site owners - and look where they've put it - 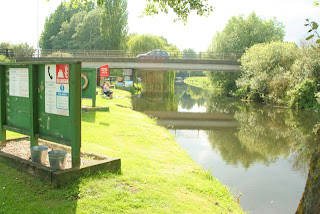 right next to the road bridge, and an overflow outlet.
Prettier from this view ... 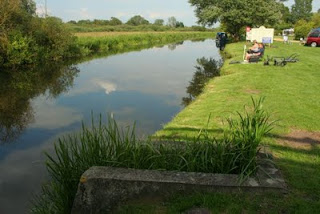 ... but less than perfect.
So, worth thinking about before you take the 2 hour trip from Hilgay, further down river. On the plus side you could use this mooring and with a bike easily get to Oxburgh Hall just 4 miles away. There are pubs and shops in the village and a shop at the garage opposite the caravan site and ample winding space (it can take 60 foot) a little further up river before the limit of navigation.
On the other hand you are a second class citizen at the camp, (you have to report to reception showing proof of GOBA membership, adults only, barbecues only by agreement, mooring fees of £2 for one hour for non GOBA members, not allowed to use their facilities, pushed away in a corner ...) and there seem to be no alternative moorings anywhere near. EA where are you?
Interesting factoid: it's the Wissey, a tributary of The Great Ouse, that gives its name to the town of Wisbech (Wissey + Bech meaning "shore")
You takes your choice .... I'd say - stay at Hilgay down river and if necessary use Stoke Ferry only as a brief launch pad for Oxburgh Hall, which is a fabulous National Trust moated building, before going back to Hilgay the same day.
Posted by Duncan at 09:52 1 comment:

Brandon on the Little Ouse

Doing a recce of local rivers by car in advance of a future boating visit I visited Brandon, at the end of navigation of the Little Ouse.
I've driven through Brandon  many a time on the way to the north Norfolk coast but this was the first time down by the river.
The river is reached along the High Street on the Swaffham Road. Cross the bridge and immediately after it on the left are Jean Paul's restaurant and The Ram, a traditional pub. Park in the layby outside the pub.
The Ram has a beer garden and a track signposted Riverside Walks. Brandon House opposite is a more upmarket hotel/restaurant.
Opposite the Ram is Riverside Way. Pass the retirement home and follow a bridleway sign down a narrow track to the river and the Environment Agency moorings, sturdy and some 20 metres long.
A small stream with a bridge adds a little turning space to the river, ample for a 50 footer I would think.
After this the EA's signs warn of low water levels and inadvisable navigation.
Brandon town provides food and supplies, take-aways, restaurants and shops.

All in all a good place for an overnight stop and an attractive trip up the Little Ouse.
PS Link to a later post about Brandon.