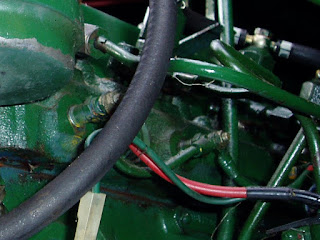 The glow plugs are essential for starting the engine from cold and we normally switch them on for about 15 to 20 seconds before turning over the starter motor on the BMC 1.8 litre engine.  Two of the glow plugs can be seen just below the fuel injection nozzles in the above photo of the starboard side of the engine. As it's some time since the glow plugs have been checked and it is recommended that they are removed and cleaned after every 600 hours of running, I decided that this task should be undertaken as part of this year's annual engine service.

An 8 mm spanner is needed to undo the cables from their terminals (don't lose the plain washers between the nuts and the spade connectors!) and then a 12 mm ring spanner is needed to unscrew the plugs from the engine block.  It is unusual to find metric parts on the BMC engine; most of the nuts and bolts require A/F spanners.  Accessibility is limited, particularly in the case of the front cylinder glow plug, which is tucked away in an awkward position behind the alternator.  The task would be made easier with a ratchet ring spanner (not a socket spanner, as the plugs are too long), although it can be done with a simple ring spanner and a modicum of patience. If it is some time since they were last taken out, the build up of carbon may make their removal more difficult, but do persevere, as they will come loose eventually with a little gentle encouragement. You may need to keep turning them, even after the thread on the plug is clear of the tapped hole in the block.

Patience's glow plugs were generally not too carbonised and were easy to wipe clean, and all registered a resistance of about 1 ohm.  This corresponds to a current of 12 A per plug (48 A for all four) or 144 Watts per cylinder at a nominal battery voltage of 12V. However I did notice that the centre terminal of one of was slightly loose in the housing.  I ordered a replacement from Calcutt Boats and it arrived in the post less than 48 hours later - fantastic service. The resistance of the new plug was a little higher at 1.4 ohms, which is either a specification change or the build up of dirt on the old ones may be lowering their resistance slightly. 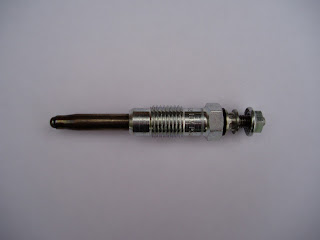 Before replacing the plugs in the block I inserted and rotated by hand the recommended 11/64 in (4.37 mm) diameter drill into the holes to clear any carbon build-up.  It is a good idea to coat the drill with grease so that the carbon particles can be removed on the drill rather than falling into the cylinders.
Posted by John at 15:28 No comments: