Following from a previous blog on the same topic, and with temperatures now in the low 30's The Environment Agency has cancelled its Strong Stream Advice for The River Nene:


The Strong Stream Advice issued for the River Nene has been cancelled. Locks that were closed to discharge flood water have been re-opened.

River flows will remain above normal. Headroom will be restricted at some sites for a time. Anyone intending to navigate should proceed with extreme caution.

Now we can start to reorganise our plans and make a dash from March to Oundle! How exciting!
Posted by Duncan at 17:13 No comments: 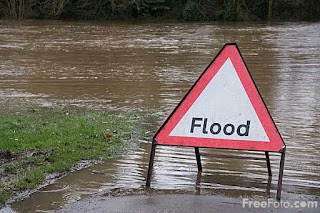 Since we left the haven of The Lazy Otter on the Old West River we have made progress only as far as March Marina, having been held up in our progress to Oundle on the Nene by a combination of SSAs and our busy schedules on other matters.
Now we have signed up for the EA's email and text alerts for flooding and SSAs (call Floodline on 0845 988 1188).
Here's the latest:

Wednesday July 11th
From the Environment Agency
"The Strong Stream Advice issued for the River Nene has been cancelled. Locks that were closed to discharge flood water have been re-opened."
Hurrah!

Friday July 13th
"Strong Stream Advice has been issued for the River Nene. Several locks on the River Nene are closed to navigation and are being used to discharge flood waters.
The Environment Agency strongly advises against attempting to boat on the River Nene."
Aaaagh!

Missed the 2 day window of opportunity! We envisage another month or so at March Marina instead of our new home at Oundle.
We dream enviously of our former moorings at the calm and lazy Otter.
Will this downpour never end?!
Are other folks having similar problems? Share your stories!
Posted by Duncan at 23:06 No comments: