As our third winter with Patience floats into view we've made sure she is prepared for the cold. Out with the water in the tank (revealing a few rust spots we'll be best touching up before the spring), out with the waste tank (pumped out at Ely) and in with the roof gear such as the poles. 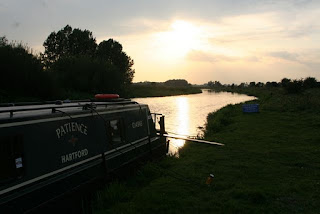 Ironically two days after our winterising there was the sunniest and warmest day for a long time, so instead of taking her out I set to with the sander and paint brush and smartened up the area around the top of the starboard side and the roof rail. With harsh sunlight it was difficult to tell how it looked but I'm hoping it's an improvement.
In addition to the rust spots in the tank the sides will need smartening up. The fridge is a bit erratic when lighting and John has ordered a replacement water pump, then I think we can really batten down the hatches for a few months.
You might read the Engineer's Report from last year for a summary of what John has done to keep the engine up to scratch for its winter hibernation.
Patience has acquired a new neighbour in the form of a self-built cruiser, Queen Bea. She does rather loom over Patience but we think in a fight Patience's metal might just win out over Bea's laminated wood. Anyway, it won't come to that if we check the moorings frequently.
Next year we'll consider moving further afield though for how long we need yet to decide. We've thought of exploring the Middle Level or The Nene now that we've seen what the Ouse and its tributaries have to offer but we've become quite accustomed to The Lazy Otter.
See also the later post on Winterising and anti-freeze
Posted by Duncan at 11:12 No comments: