For Patience, moored at Welford, the trip to Foxton Locks is a convenient overnight, and could be done in a day. This time we planned to visit Market Harborough which we last visited two years ago.
All started well, though the weather was a bit variable with much putting on and taking off of jumpers and waterproof jackets. Nevertheless we reached Foxton in good time (less than 4 hours) with only a slight collision between our aft rail and the brickwork of the Husband's Bosworth tunnel to spoil the journey. Having swept away the brick dust and found the rail grazed but not injured, we felt inspired to descend the staircase at Foxton, which can take anything between 40 minutes and several hours, depending on traffic. We feared a long queue of boats returning from the Crick event but it was no worse than usual.
We moored conveniently in the basin and celebrated with a beer and a meal at the Foxton Locks restaurant. Very busy here in the warm evening sunshine.
In the morning we headed down the Market Harborough arm, hoping to visit their museum, but unfortunately a fallen tree had blocked the canal - conveniently close to a winding hole for us but inconvenient for those hoping to leave Market Harborough. 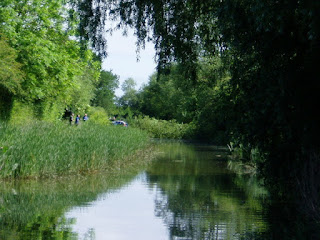 With no way of knowing how long the waterway would be blocked we turned and retreated towards Foxton. With noise from Foxton Locks Inn echoing in the distance we decided to try The Black Horse at Foxton - and that was a good choice. It was quiet, an attractive pub and grounds, with good beer and very good value lunch. The church is worth a look too. We ambled back to Patience, moored just 100 metres away, and found that the tree was now cleared.
However we were now facing the wrong way for Market Harborough so we continued back to Foxton where we used the convenient water point to wash the roof.
Now we decided we couldn't be bothered to head to Market Harborough once more so we joined the queue for the locks. Three hours later we emerged at the top lock after more than an hour queuing at the bottom plus an hour or more moored in the centre pound while descending boats passed us by (or nearly collided - Horatio that was close!).

One plus from this was that we saw the wooden butty Raymond which was laboriously man-hauled through the locks by the volunteer lock keepers. Raymond was the last wooden narrow boat built for carrying in Britain, launched at Braunston in June 1958. 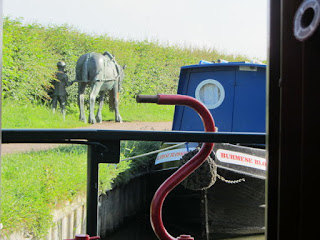 Reaching the top at 7pm, well after the lock keepers' bed times, (we salute you, hard working men!) we moored up near the sculpture of the boy and the horse then walked back to The Black Horse in Foxton. After a close shave with a fast moving black Audi we decided the towpath route was preferable to the country road ....  Nevertheless we had a very good meal and good beer and were able once more to stagger back to our moorings above the locks.
Next day we set off early to return to Welford, a very pleasant trip through dappled shade, with delightful views of the Laughton Hills.  So dreamy that I nearly missed our turning to Welford! We were further surprised to find another Patience just leaving Welford. There are 56  entries for Patience according to The Boat Index so the name is more common than we thought, but we've only seen three other boats called Patience in our seven years of boating.
Final painting of the fore deck and the roof and another excellent value meal at The Wharf in Welford. It felt like more than three days - but in a good way.
Posted by Duncan at 10:52 No comments: