Mentioning the old bridge at Stretham Ferry set me wondering how old it was and when the place stopped being a ferry (bridges usually being the death of ferries).
This view of the bridge from the east shows a pretty elegant but strong arch framing the marina beyond. 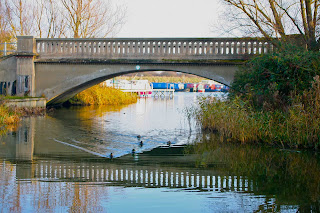 This part of the A10, the Roman Akemen Street, connects Cambridge and Ely. The old road became less popular by the 11th century when the main route was along the Aldreth Causeway. However it was still possible to cross the Old West River by a ferry until 1763 when a Turnpike Road was opened with a toll bridge.

The original bridge was so narrow and steep that farmers needed extra horses to haul their carts and motor cars found it difficult too, so it was replaced in 1925 by the present bridge, which was tested by placing four traction engines on it. Until 1976 it carried all the traffic along the A10, when the road was straightened, bypassing the old bridge and the pub. In many ways this has been a benefit for both pub and the marina, which are more peaceful with the traffic a little further away and have the advantage of a quiet stretch of road for access.