Another uneventful day in the sun ....

Our posts up to now have been about boat improvements, plans for improvements, and taking to the water. It's worthwhile pointing out that part of the fun is just pottering about, going nowhere, achieving little - but visibly relaxing, away from work, away from computers, away from the home phone. 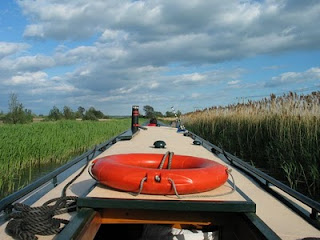 So I went to see Patience kitted out with lengths of hose to fill her water tank, a broken hasp that needed replacement from the chandelry, and a plan to sand and paint the front doors.
However while the hose was long enough, I'd forgotten the connectors, and while contemplating moving her up to an empty berth near the tap another resident told me a scary story of a narrow boat colliding with a cruiser to catastrophic effect. Hence the empty berth. I opted not to move.
Sanding down proved effective as well as sociable as several owners paused for a chat, but unfortunately revealed a woodwork mosaic of brown and white patches - white where the original brown stain had vanished. Now I knew that I had to stain the wood first before I could apply my varnish, putting back the job by a few days.
In an attempt to save the day I drove to the chandelry for a new hasp (the original broken in a struggle to beat our way off a mooring against the wind) and saw success turn to failure when the apparently good fit was about 4mm off - I could bolt through two holes but not all four.
So, why an uneventful day in the sun? Because instead of cussing about three successive failures I just retreated to the aft deck with my sandwich and a custard tart and read Bill Bryson's "Thunderbolt Kid" until my smile muscles ached.
And isn't that why I have Patience? She helps me switch off, just messing about on the river. And the next day I returned to work refreshed. Thanks to Patience.
Posted by Duncan at 09:36 No comments:

Up and Down The Cam 3

After a restful night at Burwell a short run back up the lode to the Upware 48 hour moorings at the junction of Wicken Lode then a short walk across the fields to Five Miles From Anywhere, an unexpectedly urban style pub in the middle of nowhere (hence the name ...) Nevertheless, any port in a storm and a pint from Buntingford Breweries was very welcome. 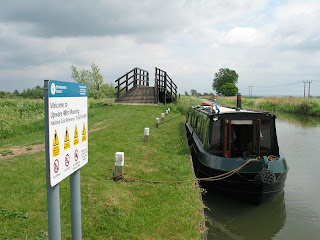 It's worth pointing out that the lode at Upware is actually higher than the surrounding fenland, so walkers on the road below would see us quite high up on the horizon - an odd sight.
Finally up to Pope's corner and back down the Old Western River to The Lazy Otter. Home again.
Was the trip to Cambridge worthwhile? Certainly! We saw our own city through new eyes, saw goslings in strict straight lines and moorhen chicks going in circles, even cygnets clambering up the back of mum to hide beneath her tail feathers. The weather could have been worse and after all, Patience is a comforting boat with warmth and food and drink and shelter from the storm.
Posted by Duncan at 18:04 No comments:

Up and down the Cam 2 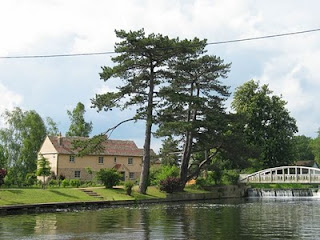 From The Bridge in improving weather to Baits Bite Lock. It's just north of the busy A14 but it is also in the middle of the countryside and beautifully tended. 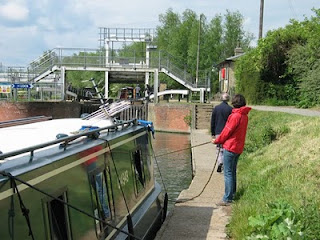 Then further down the Cam, past lots of live-aboards, rather too many boats that looked abandoned and in bad shape, through fleets of university boats with straining oarsmen and women to Jesus Lock, effectively the end of the line for motorised boats. Along the way we had seen Cambridge from a new point of view, and despite the fact we have lived here for well over 30 years it was as if we were seeing it for the first time. We celebrated by taking lunch at the carvery at The Fort St George, which we strongly recommend! 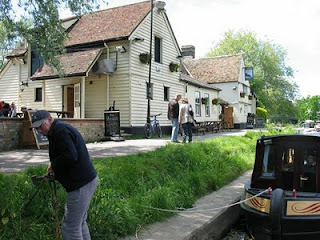 With the weather on our side it was a leisurely return up the Cam, through Baits Bite and Bottisham Locks again but this time through Reach Lock - more a water barrier than a normal lock, as the water levels are the same on each side - and down Burwell Lode to Burwell itself at the end of the line. We were fortunate to find space on a mooring here, at the point where navigation ends and only a few hundred yards from the Anchor public house.
We chose Burwell Lode over Reach Lode this time as the turning circle at the end of Reach Lode is barely an inch more than Patience (13.7m) while at Burwell there is a little more room for a multi-point turn. So we'll return to Reach after a recce and hope to enjoy the delights of The Dykes End (don't laugh ...) some other time. 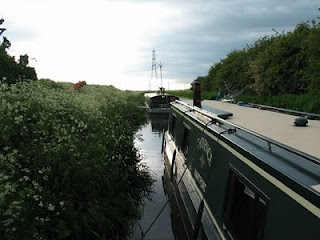 Up and down the Cam 1

We live just south of Cambridge and our friends scratched their heads when we said we were going to Cambridge for the weekend - and taking 3 days about it. Moored as we are at The Lazy Otter just north of Cambridge and living just south of the city on Saturday we drove from home around Cambridge, up the A10 to where Patience is berthed and headed up the Old West River to Popes Corner, turning right onto the Cam.
By this time the weather was pretty foul but we ploughed on, rain dribbling into our shoes (anyone got a spare trad stern?) while our wives read the papers inside.

Passing the "Five Miles From Anywhere" pub at Upware we saw all the cruisers had moored up to escape the weather, leaving no space for a 45 foot narrow boat, so we trundled on through Bottisham Lock and finally moored up by The Bridge Hotel just outside Waterbeach.
By this time the wet weather had blown away so, drying our shoes by the wood stove, we took our rest before having an evening meal at The Bridge. Good value, very busy, well organised. 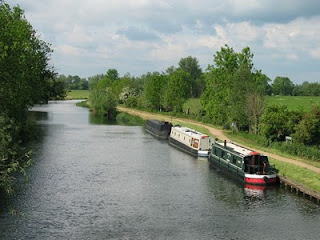 Three boats south of The Bridge. Patience in the foreground, a totally black boat called Walhalla at the end, looking for all the world like a spooky German U-Boat 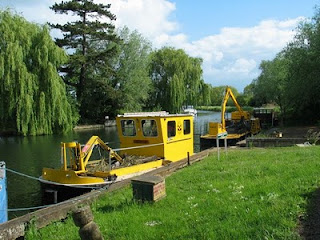 River machinery moored next to the Cam Conservators headquarters, doing a great job keeping the river free.
Posted by Duncan at 15:32 No comments: