John and Sarah have been staying next to the Cromford Canal in Derbyshire, another canal now cut off from the main network and therefore inaccessible to Patience.  It was built between 1789 and 1794 by William Jessop and Benjamin Outram to provide a 14.5 mile link between the Erewash Canal and Cromford Wharf, near Richard Arkwright's historic cotton mills. The canal closed for commercial traffic in 1944, but a restored section remains open for a few miles south of Cromford, and on which a horse drawn boat operates as a tourist attraction.
At High Peak Junction, a mile south of the canal terminus at Cromford Wharf, there was an interchange with the Cromford and High Peak Railway, which ran over the Peak District to connect with the Peak Forest Canal at Whaley Bridge, providing a short cut for the shipment of minerals and other goods, thus avoiding a much longer journey via the Trent and Mersey Canal.
Completed in 1831, the Cromford and High Peak Railway was engineered on similar principles to a canal and comprised a series of relatively level sections connected by very steep inclines (analogous to the locks on a canal), up which wagons were drawn by cables powered by stationary steam engines.
The gradients of the inclines ranged from 1 in 16 to 1 in 8 and it reached 1,266 ft above sea level, the highest point reached by a standard gauge railway in England.  It was in operation carrying freight until 1967 and part of its route now forms the High Peak walking trail.

Re-seating the blanking plate in a Morsø stove

I love wood fired stoves. I have one at home and another is on Patience. Both are about twenty years old and have caused little trouble.
But last year we had to replace the flue collar and this year we noticed smoke appearing from the back of the stove. Looking around the back of the stove I could see that a disk or plate had slipped out from the stove body and that was the source of the smoke. But how to fix it?
Metal wood-burning stoves often provide for the flue to come out from the top, back or sides of the stove, so you can choose your configuration according to where you have your outlet.  Here is another stove I know well, with the blanking cap on top, as the flue comes from the back. 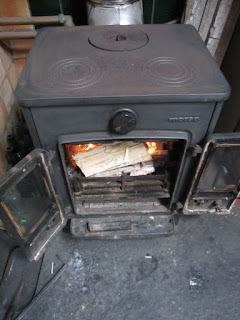 Our flue comes from the top, and Morsø have provided a blanking plate in the back to seal up the unused hole. After twenty years of use ours had come adrift - but we weren't sure whether it had been held in place by gravity, flanges, bolts or some other way. And how could we replace it? Would we have to dismantle the stove? And how would that work anyway? Stoves are included in the boat safety check and must be made safe so something must be done.
After a close examination using mirrors and torches in the small gap between stove and wall we resorted to a web search, first of suppliers, then of forums. And this is what we found:
The plate could easily be removed without damage. We inserted an old screwdriver into the gap and gently levered it out.
The plate had been held in place by two lugs screwed to the inner edge of the plate. This made them inaccessible from the outside.
The body of the stove was in satisfactory condition but there was debris, black and gritty, inside the hole and around the edges. 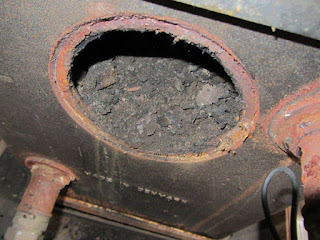 We also found that gaining access to the inside of the hole from the front of the stove was prevented by the baffle, a metal shield which directs smoke up the chimney (and prevents flames going up). Some people say you can remove the baffle to get access to the hole but we found it was very firmly held in place. If you can remove the baffle you'll be able to fit a new plate with lugs. That is the best answer. But we couldn't remove the baffle so ....
... here's our solution to the problem. This is what we did:
1. Remove the plate, as above, gently levering it off if it hasn't already fallen out.
2. Clean the plate and the rim of the hole with a wire brush, especially the edges.
3. Remove as much of the debris from inside the hole as you can and dispose of it. You may find the broken lug(s)! Test to see that the cleaned plate fits neatly into the hole. You might have to cut away any remains of a lug.
4. Buy some fire cement.
5. Brush a little water onto the edge of the plate and the edge of the hole.
6. With a spatula, press a layer of fire cement all around the edge and outer surface of the hole.
7. Place the plate neatly and firmly into the hole. Push firmly. With a small hammer and a short length of timber you should be able to tap the plate firmly so that it is almost flat to the back of the stove. Don't hammer the stove or the plate directly. Remove any cement that has squeezed out and check there are no visible gaps.

And that's it! Let the cement dry according to the instructions on the pack. Take the opportunity to clean the rest of the stove and to tidy your log pile. Check carefully that the plate remains in place and that no more smoke comes from the stove back. Check this as part of normal maintenance: it's a health and safety issue. Continued heat may cause the fire cement to crumble and it will need replacement - though now you know how to do it that's not a problem.
If your blanking plate is damaged or warped you can buy a replacement from any Morsø supplier. Measure your blanking plate and make sure you know the correct model of stove.
Finally, my sweep tells me that we should have fire bricks to deflect the heat from the rear and sides of the stove.  This is true of steel stoves as well as cast iron. A couple of fire bricks would protect the blanking cap and would protect the sides against direct heat.
In extreme cases, he says, he has drilled into the blanking cap and inserted a stainless steel threaded rod then wound a metal bar so it lies across the rear of the stove, holding the cap in place. Too difficult for me, but I think the fire brick is a useful and important addition.
Which is better, steel or cast iron? It's explained here at StoveWorld.