Even though we winterised Patience we've had a sneaking worry that the cold could still get to her. Last night, driving back from Crishall, the highest point in Cambridgeshire (so, hardly high but quite exposed) we noticed the temperature had dropped to minus 14 just after midnight. You need a fair bit of anti-freeze to combat that. On the other hand, as John pointed out, even where the ice is several inches thick, as it is in our marina, the engine compartment is surrounded by relatively warm (above zero) water so the anti-freeze in the engine has only to protect it for a degree or two. 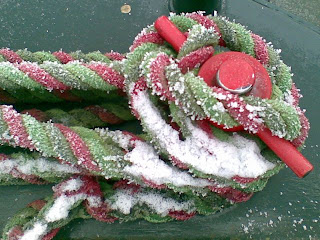 Inside the beer was unfrozen, the water pipes flexible and since all had been drained that could be drained I left with a sense of relief. No chance of turning the engine over with the propeller under several inches of ice so I left her with her mooring ropes under a light coat of snow and spiders' webs sparkling white in the bow.

Patience is drained down so the frost doesn't catch her, but I do wonder about the boat that seems to have been abandoned near my office in Godmanchester.
I've seen no-one near her day or night and she's been moored, apparently without a license, in the same spot since early August. 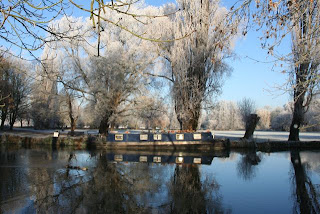 She looks beautiful amidst the frosty trees at the Godmanchester backwater - but six degrees of frost can't be doing her any good ....
Posted by Duncan at 20:40 No comments: