The Environment Agency does a good job of warning us about potential flooding.
In the low-lying area where Patience is berthed and being on The Great Ouse we naturally face flooding at times of heavy rainfall like the present.

Fortunately on Saturday, Patience was sitting well in the water, with spring lines holding her confidently but not too firmly to her berth.
But the rivers are high - as you can see on The Environment Agency's flood warning map.

This is what it was like last year at Godmanchester. 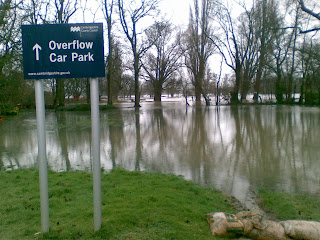 This is the rear of the Cambridgeshire Education ICT Centre, looking out over the Great Ouse and here merging seamlessly through the trees with Port Holme, the largest water meadow in England.
And this is what you do not want happening: 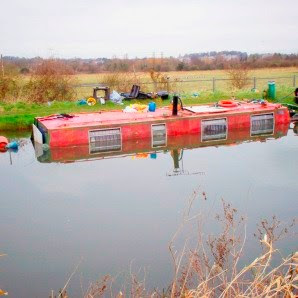 (Kennet and Avon Canal February 2008, from The Reading Chronicle)
A bilge pump activated by a £20 float switch might have prevented this, though remember that by turning off battery power when you winterise your boat you would also turn off the power that works the pump.
Other causes could be an ill-fitting weed hatch or a worn stern gland (tighten yours daily!)
Posted by Duncan at 22:59 No comments:

We had an interesting trip to The Boat show at the NEC. On a mission to find the best way to add two berths to Patience, we'd already reached some conclusions about the design of two benches and a table that could become two beds or a double bed, but we wanted to test our ideas against the expertise of experienced boat builders, caravanners and camper van designers. 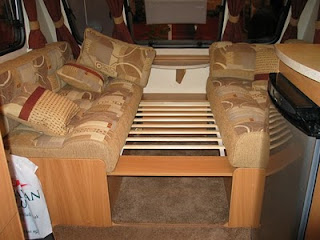 Here's an interesting layout from a caravan. The extra foot wide of a van can enable side to side beds as well as fore and aft. These two benches have been joined by a slatted section that is cunningly hidden in a small drawer and pulled out to fill the gap between the benches. It rests on a ledge in the edge of the benches and the slats are joined together by a flexible tape. The backs of the benches lay down as part of the mattress.
This would work well on a narrow boat, though our preferred option is to use a table with its own foldable legs. When eating or playing games the table would be free-standing between the benches; when sleeping it would rest on the ledge as a base for the bed. Alternatively without it the benches would be two fairly narrow single beds about 2 feet 3 inches wide and 19 inches high (13 inch base and a 6 inch mattress).
The carcases would be made mainly of marine play 20mm thick.
At the moment we have two large white leather rocking chairs but these will soon be redundant. 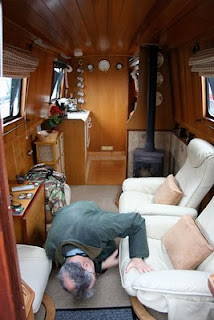 Anyone care to offer a fair price? Contact Duncan.
Posted by Duncan at 21:01 2 comments:

Barges on the Thames

Spent a few days in London including a lovely day strolling up and down the Thames.
The views over the Thames from the restaurant at the top of the Tate Modern are fantastic on a bright spring day.
Walking across what is known as the "wobbly bridge" towards St Paul's a raft of barges chugged beneath us, stacked with containers and bound for some rubbish dump down river. 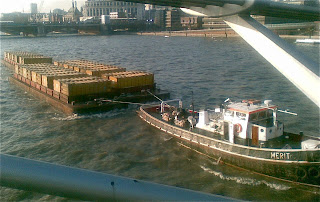 Three barges are tied together as a giant butty boat and towed downstream by the tug. I'm told they are called Thames Lighters. No mudlarks in sight, but the Thames is a perpetual source of life and fascination.Samuel Pepys was well acquainted with barges - just look at www.pepys.info where you'll find even the king had a barge (May 1661).
Posted by Duncan at 16:56 No comments:

Yes the work on Godmanchester Chinese Bridge continues, despite the cold.
I nipped out at lunchtime to see progress today. With the old bridge taken away last week they have delivered half of the new bridge - white and clean and identical to the old one as far as I can see - and have loaded it onto a pontoon fitted with its own crane. That is now resting in the water by the bridge while the workmen top up their flasks and the mayor drives off to another engagement. Yes, so important is the Chinese Bridge to the people of Godmanchester that they have summoned the mayor to check on arrangements. 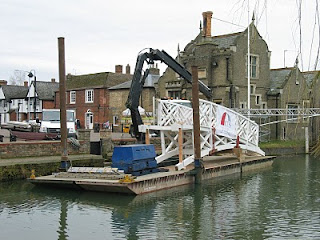 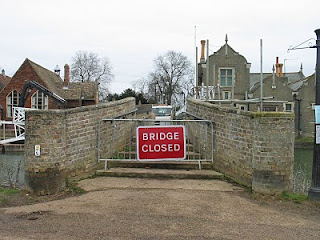 It would be interesting to see the pontoons being moved into place as I can't spot a rudder. I imagine they'll simply use ropes and lots of men. A bit like the mediaeval cathedral makers, though rather less romantic....
Posted by Duncan at 13:37 No comments:

By good fortune the place where I work has a long garden that leads down to the River Ouse at Godmanchester, where in summer narrow boats and cruisers often moor. Yesterday I couldn't fail to see a massive crane hanging over the river, which made me curious. It turned out that they were planning to remove the famous Chinese Bridge, which had become unsafe, and replace it with a new one.
Now this is no tiddly little bridge - it's pretty big and would have to slide and swing into a small paved area next to the road. So that would be a sight to see. And the crane was huge! 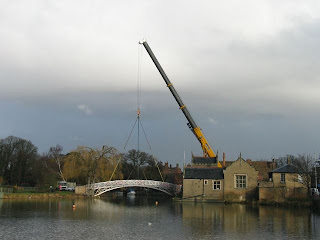 An hour later there was still no movement and I was freezing cold and had to get to work, but I kept an eye open, just glimpsed the bridge being raised and swung across, (this second picture just shows a simple and temporary scaffolding bridge) then dashed out to see it "landed" and soon cut to pieces. 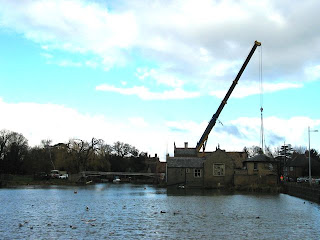 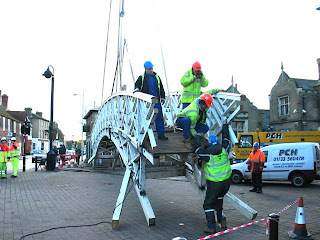 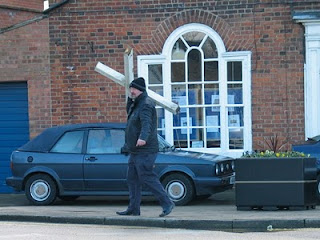 One or two folks even took bits away with them. This chap is clearly bearing his cross ...
The Cambridge Evening News and The Hunts Post both filmed it. The lady from the Hunts Post was more friendly.
They expect to replace it with a new bridge - which everyone hopes will look identical - in a week or so.
I realise that since buying Patience I've started to notice things like bollards and weirs, river banks and bridges, which previously I'd mainly passed by. It's good! I've also joined the Great Ouse Boating Association or GOBA, which does good works and knows of good moorings.
Posted by Duncan at 08:52 No comments:

Just a quick word of praise for Nick's Canal Route Planner — CanalPlanAC — an interactive guide to the inland waterways of Europe. It plans journeys, calculates the length (distance, number of locks, time taken etc) of your trip.
I'm sure he won't mind me saying that it's a bit rough and ready at the moment - but for me it supplies a need and does its basic job really well. If you log in properly you can amend the information if you believe it's wrong and tailor it to your needs. Give it a try and tell Nick you value it!
Posted by Duncan at 12:38 No comments:

Even though I use computers every day it's only recently that I realised just how many blogs there are out there!
I was just starting to create a list of good narrow boat blogs when I quickly realised first - there are loads of them and second - Granny Buttons has already collected 150 of them - and third there is a list of waterways blogs ranked in order of hits (I'm not confident enough to add Patience yet) and fourthly nbDebden has a constantly updated list of blogspot blogs, even down to the time they were last updated! Makes me feel guilty ....
So if you want to find out what narrow boaters are up to in the winter, some liveaboards and others itching to get back on the water, browse one of these lists and catch up with what's going on.
The ones I've read so far reveal narrow boat bloggers as really interesting, literate people with a wide variety of skills. But I guess you knew that already ....
Posted by Duncan at 16:19 1 comment: