With a sunlit day on the cards we abandoned decorating and headed up to Ely for what is likely to be our last trip of the year. We planned to fill up with diesel (topping up helps avoid moisture in the tank over winter) and to pump out in advance of refitting seals on the marine toilet.
Ely was in sunshine most of the time (which compensated for the unpleasant job of pumping out) and a meal at The Cutter with a pint of Wherry compensated for anything else.
Today we also received good news about The Lazy Otter as a marina. The leasing of the restaurant had sown doubts in some minds, but the owners confirm that they are planning a cesspit for the marina (which may sound foul to you but is good news to us and particularly to the live-aboards at the Lazy Otter!).  Oh, and they're not putting the mooring fees up, so that's extra good news.
This may therefore mean that this post should be entitled Last Drain from Ely ... but enough on that subject for the time being.
Posted by Duncan at 19:34 No comments:

I heard Andrew Marr (an otherwise intelligent chap) sounding off in a rant about bloggers.
He sneered that they are "inadequate, pimpled and single" loners who rant about the world from the safety of their mothers' basements.
Well of course he had to show off at a literary festival that he could be as vituperative as the best of opinionated columnists, but if you don't mind I'd just make two points.
The first obvious point is that he didn't distinguish between the different types of blogs. He was snarling at news bloggers, amateur journos telling the world about the news in their corner of the globe - and often ignoring professional standards of balance and perspective as well as replacing facts with opinion and rumour. At best these folks can tell it like it is because they're there, in Hurricane Katrina, in army controlled Burma, in a blizzard or a political storm; at worst it's just bile and rant. That's what you get from the freedom to write with new media; these are the strengths and the weaknesses.
However some of us bloggers may have other intentions.
Our blog about Patience is intended to be both a travelogue and a guide to owning a narrow boat. A worthy enough aim, I think. For me it reminds me of our trips and provides boating information that we wished we had when we first bought her. I'm sure Sam Pepys would have blogged, though anonymously .....

The other obvious point is that bloggers come in all shapes and sizes and the only common link is that they want to keep an online diary. Imagine a well-educated and reasonably sociable family man and writer in his fifties and with a moderately successful career behind him. The description fits both Marr and me. Barely a pimple in sight between us. However, I don't vent my spleen at literary gatherings. And he gets paid well for giving his sensationalist opinions.
I just blog.
Posted by Duncan at 16:30 No comments:

Back Down The Lark

Early mist and bright low sun at Judes Ferry started my long journey back to Patience's home moorings.
On the right behind the orange ring is the cut between the old far mooring and near newer jetty. Doing a 3 point into the cut is easier for the boat in the picture than for Patience, which has to reverse past it in a straight line before turning sharply in.
The first section back down to Isleham Ferry was delightful. I saw three kingfishers flashing in front of me and two swans took off and soared overhead. 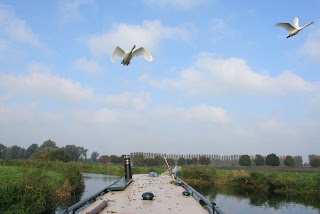 A beautiful peaceful day and not a single boat on the Lark apart from Patience.

Back down the Great Wide Ouse and soon I was back at Ely from where it's not far back to The Lazy Otter and our home mooring. 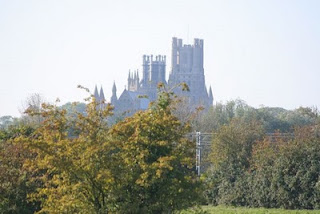 Up with The Lark 2

Sunday saw me one of the first visitors at the Ploughing Match and the Pumping Museum (Museum of Fenland Drainage). And so I saw some of the tractors brought in on low loaders and being moved into position along a very long straight line on Green Farm. Each ploughman his own area marked with stakes, bright tractors and shining ploughs cutting through jet black soil. Men with soft Fenland voices earnestly calculating straight furrows and depth, huge adjusting spanners in hand.


Meanwhile, beyond the Eel Pie Band, the classic cars and the wild boar sausages, the Pumping Museum steams and rattles its oily way at full tilt to remind us that at Prickwillow agriculture and engineering go hand in hand, side by side. The drainage engineer draws water from the soil to enable the farmer to plough and sow then place his produce on the river barge on the canal created and watered by the  drainage engineer who ....
And then it's off towards Isleham, passing the remains of one of the original pumps, (there are more pics on wikimedia) known now as The Pepperpot having lost its sails long ago....
... through Isleham Lock and on up the beautifully winding Lark past Gravel Gardens to Judes Ferry where I moor up in some rather high moorings at the bottom of their beer garden and take a fine pint of cider.

I'm not wildly keen on Judes Ferry as a pub / restaurant, as I felt that it had a character bypass and I didn't like its big screen pop videos, but they have a broader-than-pub-grub menu and it's a pleasant garden on a fine day. Besides it's a handy mooring - though next time I would choose the ramshackle set of moorings just north of the pub. These are a little quieter away from the chatter of patrons and most importantly - at this furthest point of navigation for a 45 footer - you can turn the boat directly into a side channel instead of having to reverse first, as I did. I wasn't brave enough to risk turning in the river itself which my Imray Guide tells me is 13.7m while 45 feet is 13.716m .... A tight squeeze!
Posted by Duncan at 21:51 No comments:

Up with The Lark 1

With a promising weather forecast we planned a 3 day trip up the River Lark to Judes Ferry. Unfortunately John had other commitments, but I was keen to go on - and had an excellent trip in glorious weather.
We set off together from The Lazy Otter, pausing at The Cutter at Ely for lunch, then on into uncharted territory for us, up the Great Ouse which heads north to the Denver Sluices and thence the sea. Here the river is very broad, more like a German canal, and frankly once Ely is to stern, rather unattractive.
But after a while up comes the junction to The Lark, a fair sized tributary to start with, only narrowing after ten miles or so, at Judes Ferry. Some sections are quite straight, notably the first section which must be artificial before it joins the ancient course of the Ouse to reach Prickwillow. This village itself may be a bit of a non-event as it has no shops and even the church was closed on Sunday. However it does have a fascinating Pumping Museum which is well worth a visit. As the Fens in their present form rely entirely on centuries of pumping out water, the Prickwillow Drainage Engine (and the Stretham Pumping Engine) are important working relics.
With John heading home I was moored up quietly with only the sound of tractors charging across the bridge as they brought in the harvest (note for next time - there is a quieter mooring a few yards up beyond the bridge). I managed to steal a look at The Old Vicarage which shows the results of Fen drainage. It was built on clay foundations with two steps leading up to the door; now there are nine steps, and the old cellars are ground floor rooms!
But having arrived, the best day was yet to come ...
Posted by Duncan at 08:43 No comments: