Today was bracing, with a chill wind, but the rain held off and the middle of the day was quite warm. A good day to collect Patience from the tender care of the folks at North Kilworth Wharf who have given her a proud black bottom and a new hatch over the engine - as well as a pump out. This was good work at a fair price and we are very pleased. Once again we can stand firmly at the stern without worrying that we would slip and slide away.
And so we should add to our annual servicing a coat of varnish to the edges of the hatch as it was damp creeping in from the sides that caused the previous hatch to swell.
Returning with pride to Welford (and being extra careful to avoid scraping her freshly painted hull) we enjoyed the usual excellent lunch at The Wharf before setting to with winterising.
We've given details of winterising elsewhere but in summary we've drained the water from tank, taps, shower and loo, changed the oil in gearbox and engine and given her a general brush up before the winter sets in. Patience will be generally on her own until the spring so it's important that things are ship shape and closed up. It may not feel as if she will be ice-bound, but it's only a few years since this is what happened on the Old West river - 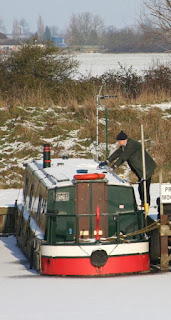 Yes that really is ice and snow, in 2010
I also took away any food that was out of date, listing it all so we can replace with basic food next year. See the article on basic food for your boat. 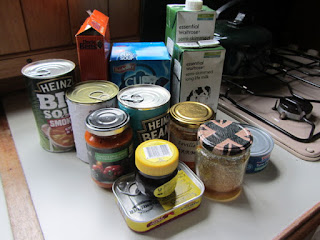 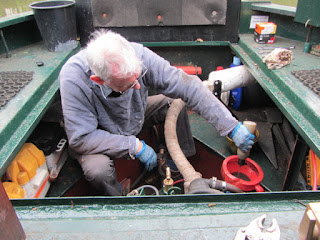 So rest quietly, Patience. We'll pop in to check you're OK when we are passing, but there's no need to stir until spring.

Every four years Patience has her bottom blacked with a couple of coats of bitumen. This is essential to keep her hull in good shape, preventing pitting of the metal.
Though this can be a DIY job we've found that the cost of landing her is greater than the cost of having someone paint her and it is a messy job, so we pay a bit to have someone do it for us.
This is the fourth time we've had Patience in dry dock and it's interesting to compare the techniques as well as simply staring at the parts of her that aren't usually visible.
First time was for her very first inspection, a survey in dry dock when we were considering the purchase. Fascinating to see her bottom for the first time!
Second time was for blacking at Earith. A broken crane caused delays (she was craned out of the water in a sling) and perhaps the blacking was put on in a bit of a rush, but no harm done. And we did have the chance to see one of the grey seals that have made their home in the marina.
Third time was in the comfort of the workshop at Oundle, where we were moored.  We had an Oundle man apply the blacking then we paid for an extra few days under cover while we painted her up in other areas more easily reached when she was out of the water. 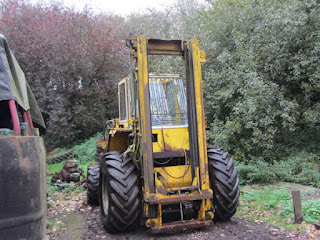 And now the time has come again, and we have brought Patience to the workshop at North Kilworth Wharf, where she will be cared for this week. This is the tractor that towed her out of the water into the slipway. First you float the boat over a cradle that is attached to a long towing pole. Then the tractor tows the cradle out of the water, with the boat resting on top.
Now we have our first view for four years of the condition of the hull. Surprisingly there are large numbers of fresh water mussels clinging to her. 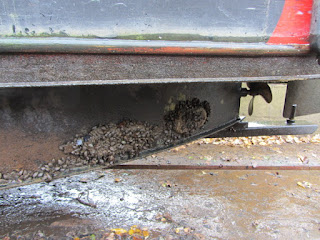 Patience is here on the cradle which in turn rests on wheels on rails. 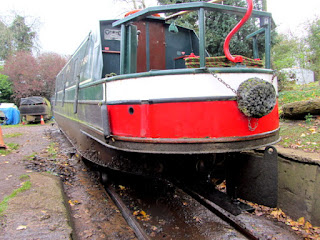 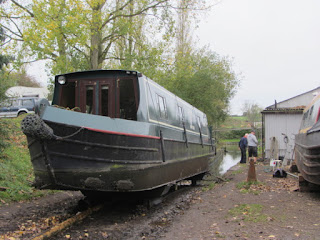 In addition to blacking they will weld on some sacrificial anodes. These are blocks of magnesium which are bolted to the hull and corrode faster than, or in place of, the metal of the hull and prop, thereby giving protection. It is important to check the anodes, as they prevent electrolytic corrosion of the steel plate and the bronze stern gear. And we don't want the steel hull to wither away ....

And so we leave Patience for a few days while the hard working guys at North Kilworth dry her off, paint on the bitumen, weld new anodes and attend to her every need. More details next week.
And by the way, don't confuse the well established wharf at North Kilworth with the yet unfinished new marina. A lot of work going on there and it will be a fine sight, but we prefer the well established wharf.

Water water everywhere - which is hardly surprising in a canal environment, but we do find that more water than we'd like ends up in the engine compartment. For a while we added a little tub that caught drips through the engine hatch, but recently the situation seems to have become worse. Where was it coming from?
John tightened gaskets, jubilee clips and checked hoses, but there was no clear culprit. Until now.
A gutter surrounds the engine compartment and should collect surface water towards the stern and into two outlets, directing the water out into the canal. However on close inspection the outlets, hidden in the hull, have small holes and also are low in profile. This means that surface water decays leaves which clog the gutters and water flows over the low edge or through the small holes and ends up in the engine compartment bilges. 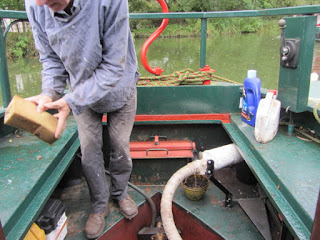 It's not so bad that it activates the bilge pump but it's not too good to have water in the bilges.
So John scrubbed the gutters, cleaning them of leaves and scraping away loose material and rust. Then with coats of anti-rust, red oxide, grey undercoat and two coats of gloss, he firmed up the gutters. The rear gutter was more difficult as this acts as a hinge for our hatch - hence in this picture it remains red, though it will be painted again next time.
The outlets, under the rear corners of the gutters, were cleared as far as possible, then a layer of fibreglass added to build them up. Now after several weeks buckets under each outlet remain empty even after rain, so John's treatment seems to have worked.
Next we are to take Patience up to North Kilworth for bottom blacking and for a new hatch, as the present one not only lets in the water but is slippery on the surface and crumbling at the edges. Patience has been cleaned and polished in preparation for her grooming session at Kilworth and is excited about spending a week there!
Posted by Duncan at 22:57 No comments: