Like the Somerset Coal Canal and the Bude Canal, here is another remote and land-locked West Country waterway, which was visited by John while staying in West Somerset, but which is off limits to Patience without the help of a low-loader. 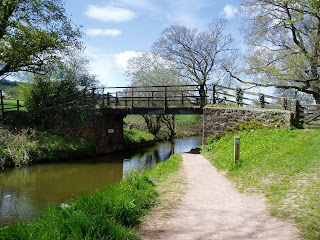 The Grand Western Canal currently runs 11 miles through the beautiful mid-Devon countryside, from Tiverton in the west to Loudwells at its eastern end.  The Grand Western Canal was part of a planned 46 mile link from Topsham on the River Exe to Taunton, where it connected with the Bridgwater and Taunton Canal and, had it been completed through to Topsham, would have provided a link between the Bristol Channel and the English Channel. The Tiverton section opened in 1814 and for more than 100 years carried limestone from quarries at Holcombe to extensive lime kilns at Tiverton Basin, where quicklime was produced as a fertiliser.  However,  the section to Topsham was never built and by the mid 19th century the Tiverton to Taunton section was facing competition from Brunel's Great Western Railway.  It finally closed in 1924.

In recent years, the 11 mile lock-free section from Tiverton to Loudwells has been restored by Devon County Council as part of a country park. A few private narrow boats and day boats use it, as does a wide-beam horse drawn trip boat, the 'Tivertonian'. 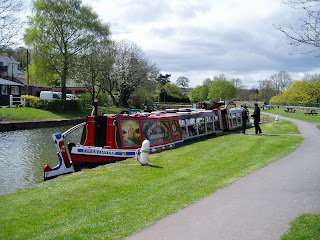 Near Manley bridge there is a memorial to the two-man crew of an RAF Canberra bomber, which crashed into the canal on 21 November 1961 while on a training flight from Germany. 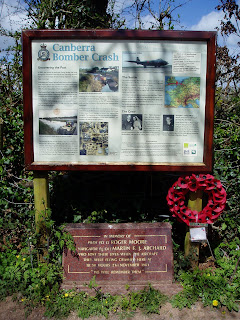 We affirmed our belief that we are fair weather boaters by aborting a planned trip up the Leicester Arm due to bad weather. In intermittent heavy rain showers we did some basic maintenance, tanking up with water, disinfecting pipes and clearing air blocks while using the rain to scrub the rather grubby roof.
At a very good lunch at The Wharf (Welford) we agreed that the weather forecast (cold, sunny intervals broken by bands of rain, occasional light snow showers ...) wasn't attractive enough to entice us out, so we wrapped dear Patience up for another few weeks before we try to take her out again.
On an impulse we decided to go down to the museum at Stoke Bruerne (an hour by car - three days by boat!) and enjoyed the displays and the tea and cakes. A very friendly museum and a good spot near the Blisworth tunnel.
Last year we reached the Blisworth (north) end and opted not to continue to Stoke Bruerne as we were uncertain about moorings and turning. At 3,076 yards (2,813m) long it is the third-longest navigable canal tunnel on the UK canal network after Standedge Tunnel and Dudley Tunnel (and the ninth-longest canal tunnel in the world). On yesterday's inspection we need not have worried: there is extensive inline mooring and a good winding hole plus two pubs and two restaurants as well as the museum and café.
Here's the view of the lock - taken from the loading bay window of the old store that is now the museum. What appear to be two locks, one on either side of the central island is in fact one operating lock (on the left) and an old non-functioning one on the right. 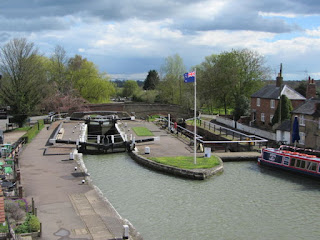 Hailstones start falling heavily as I write this. A good decision to call off our trip.
Posted by Duncan at 12:38 No comments: